The scope of this project is to create a responsive web app. The web app will consist of a ‘wizard’ style main flow that users would need to complete in order to successfully launch their poll.

The project was largely undefined when I came on board. The idea to crowdsource answers to single-question polls via social media was already established, but the problem space hadn’t been explored and the target market hadn’t been determined. Due to these unknowns, I decided to start the process with foundational interviews in order to discover insights into our potential users’ thoughts, behaviours, needs and goals in this area.

As the target market was not yet defined, we selected participants from 3 categories of people we thought could be interested in using the product: startups, SMEs and corporates. I interviewed 15 participants in total.

The needs and attitudes of startups and SMEs were similar. Corporates, however, had vastly different needs. Based on the interviews, we decided to focus on startups and SMEs for the initial product. Here are some of the main findings:

Keeping in mind the user needs discovered in the interviews, I looked at the strengths and weaknesses of our competitors. There aren’t currently any competitors that offer the same service, so I focused on secondary competitors - polling services and research panels.

Based on our decision to focus on startups and SMEs, we created two personas: one solopreneur and one SME CEO. 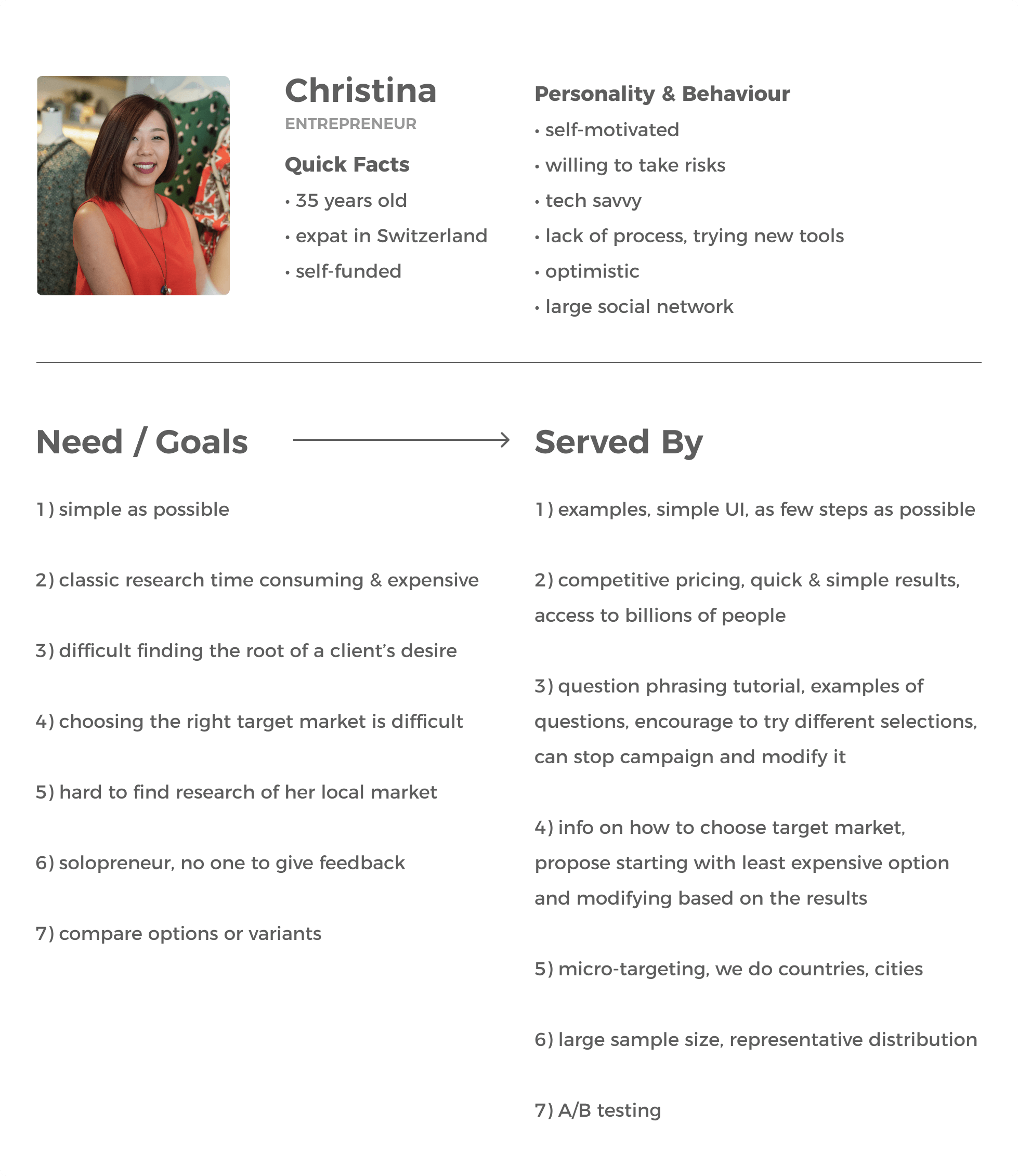 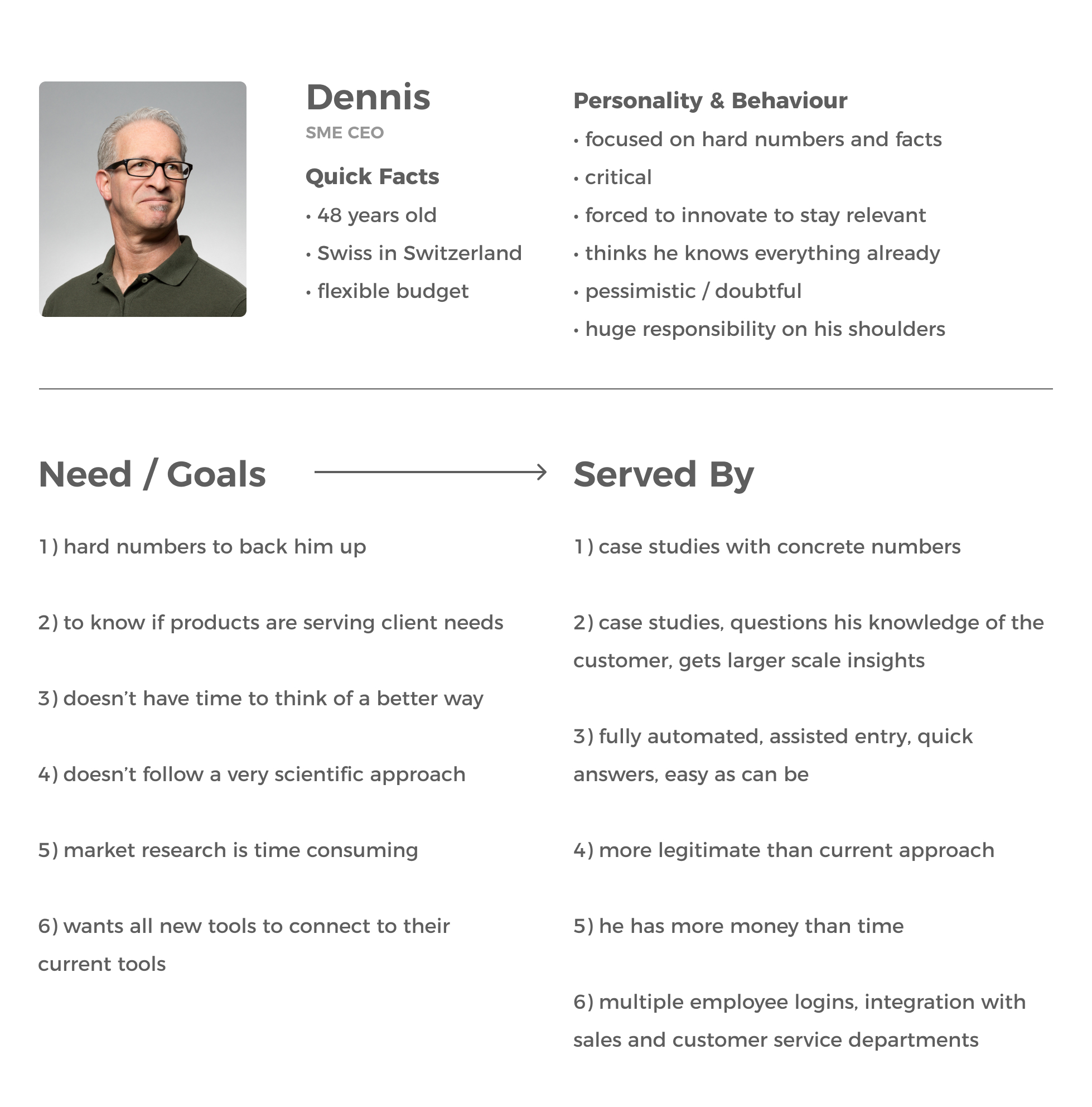 Before moving on to the ideate phase, I took the time to document the various features interview participants had mentioned for possible future iterations.

We created a user journey map to see what users might be thinking and feeling at different points during their journey through our web app so we can address those emotions and concerns as they arise. 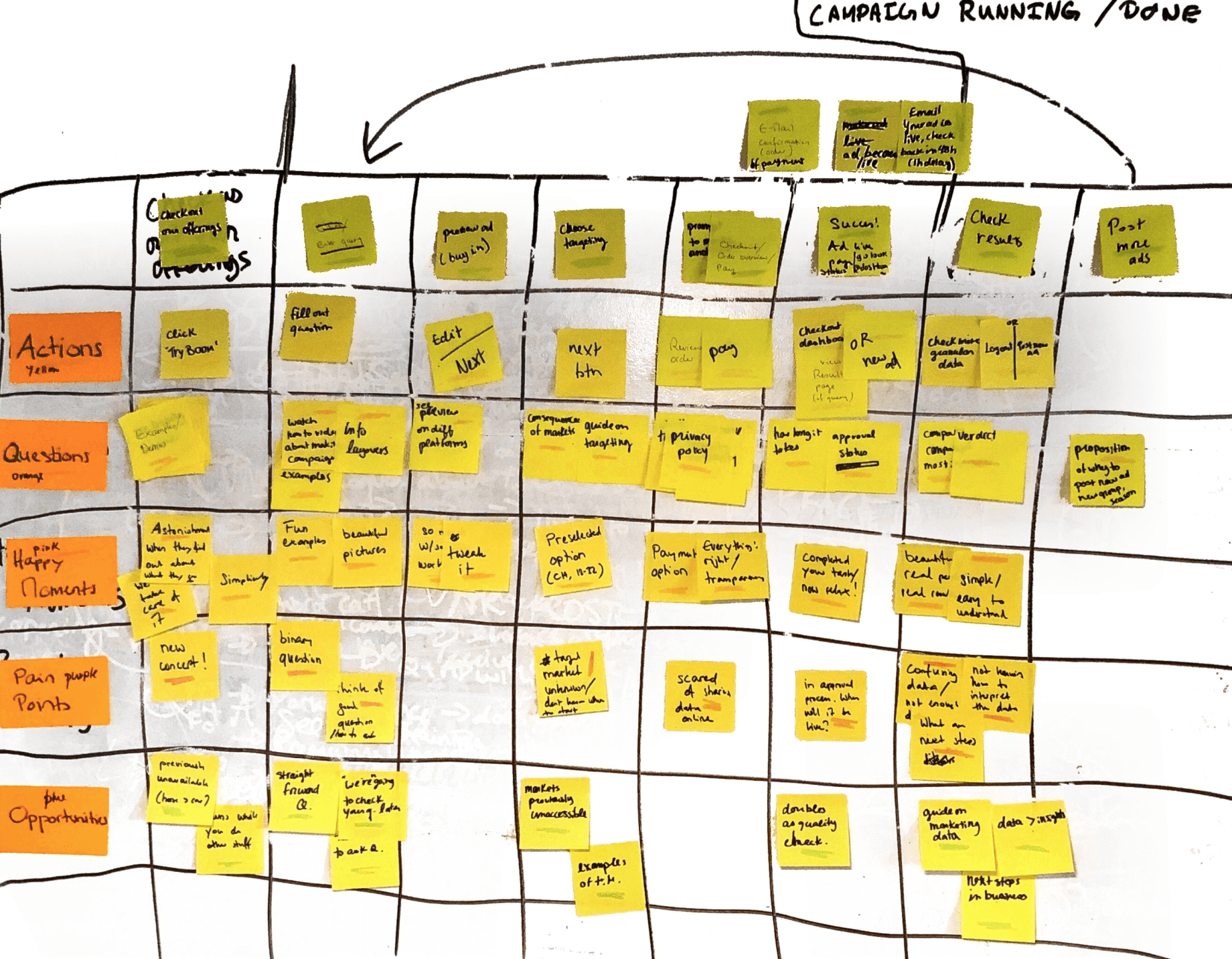 We then prioritized all the features we wanted to integrate to make sure we stuck to a manageable MVP, so we could get into testing as soon as possible. We divided the feature list into four categories: Must-have, Nice-to-Have, Surprising & Delightful, and Can Come Later.

Time to start putting it all together! Using what we learnt during the research phase, and the informed decisions we made during the synthesis phase, I started laying out the information architecture. 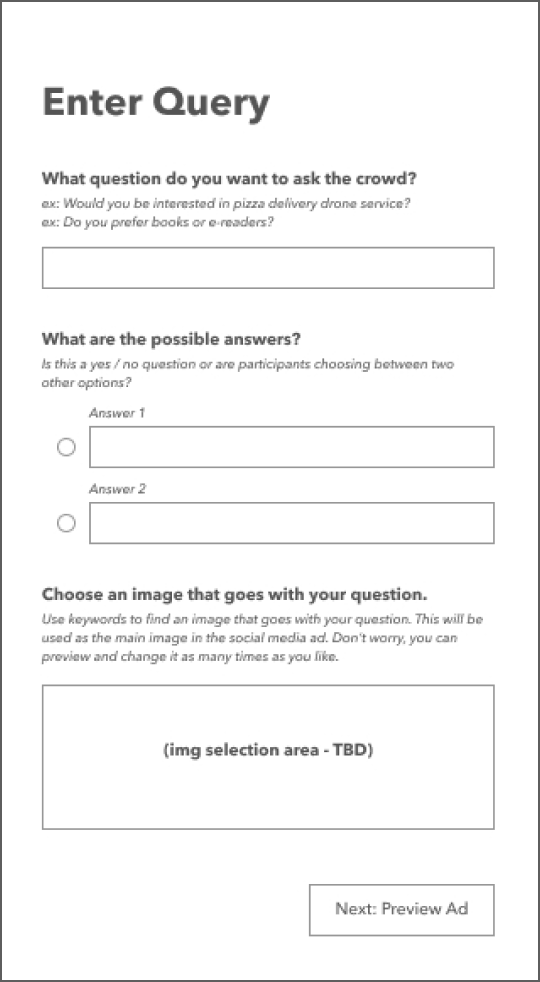 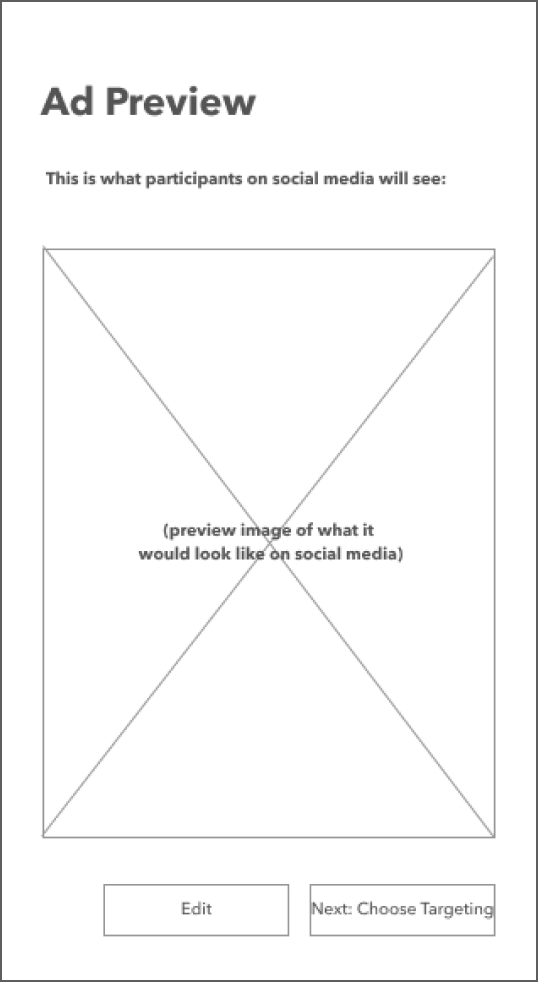 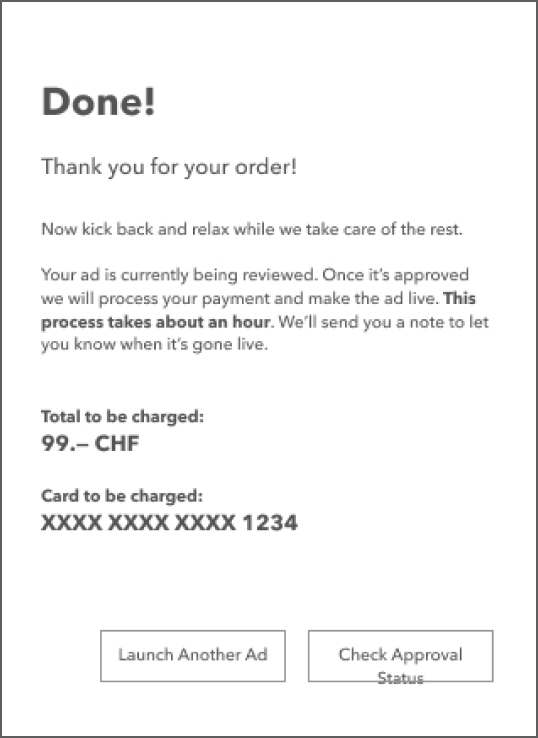 We only had time for limited testing, so we decided to move ahead with the mid- fidelity designs and do the user testing with those.

We then tested our prototype with 8 participants that matched our selected target market. We gained incredibly valuable insights that led us to pivot our positioning.

The most critical feedback item we received was that people were unsure when they would use this product. The prototype was a one question polling service that was framed as a professional research tool. However, they felt that they would prefer to use longer form surveys or polls for more in-depth, serious research.

This insight about users preferring to use more in-depth services for research helped us realize that what we were offering was more of a ‘temperature check’. We tore it apart and turned it into a quick, easy, inexpensive tool that users can use with a couple clicks.

We also integrated a more playful narrative of throwing a Boomerang with the user’s question attached to it. The Boomerang flies around the world, collecting feedback and then comes back home.

This new, light-hearted version is now more in line with the product offerings. In a couple clicks, users can send out a Boomerang and see what results come back. 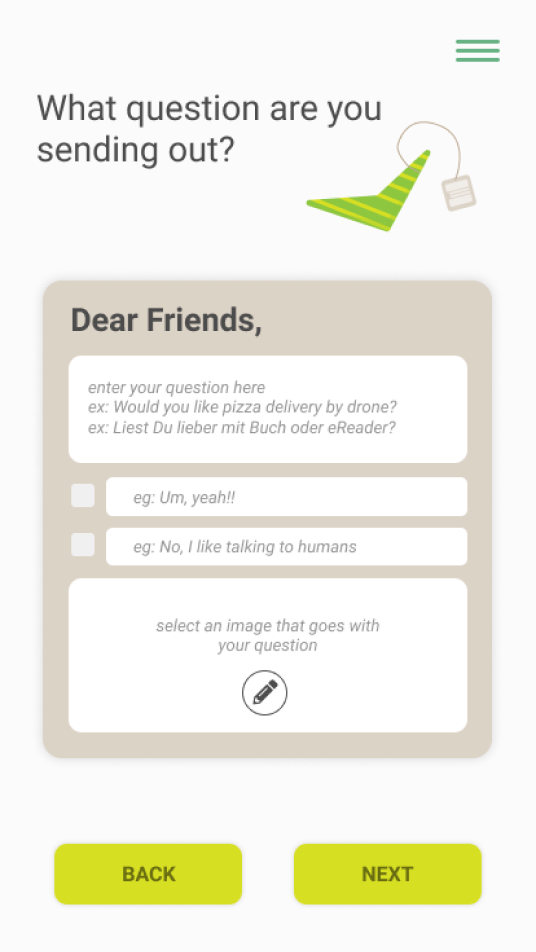 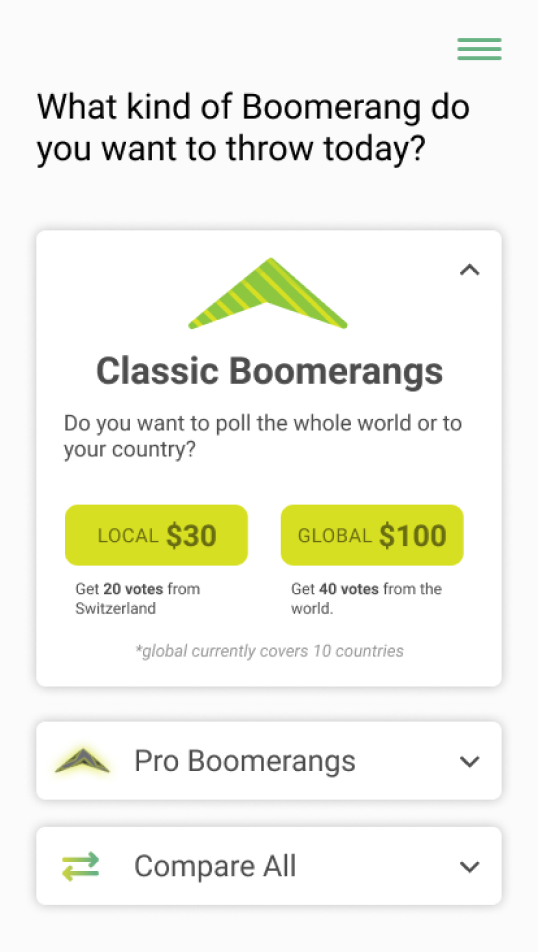 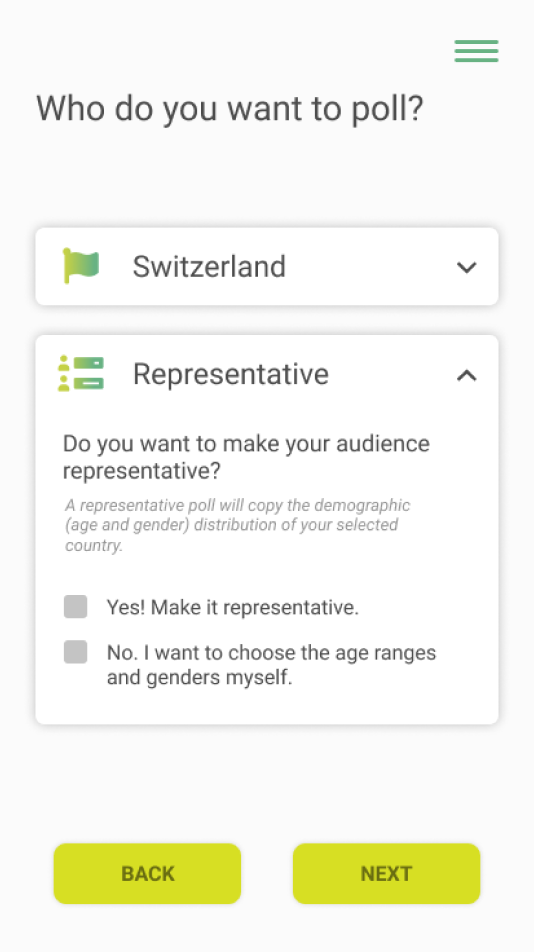 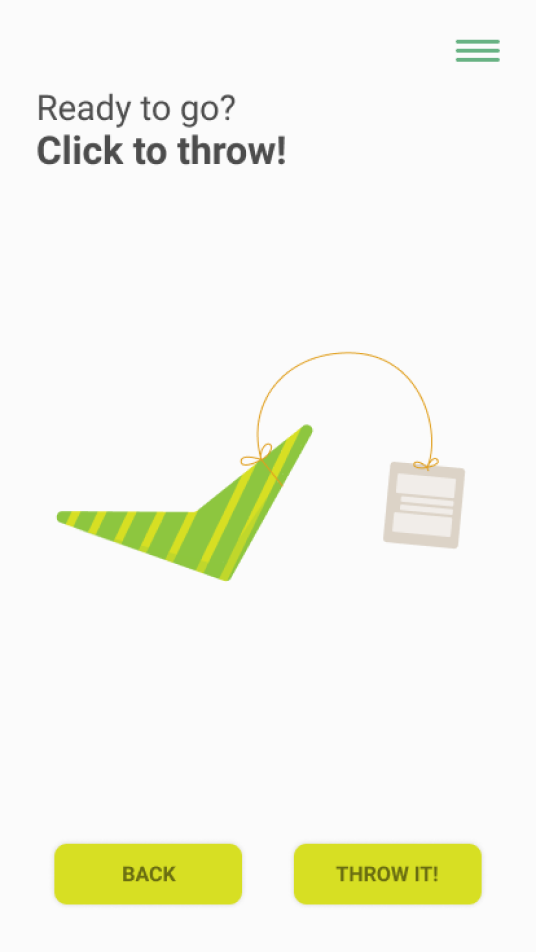 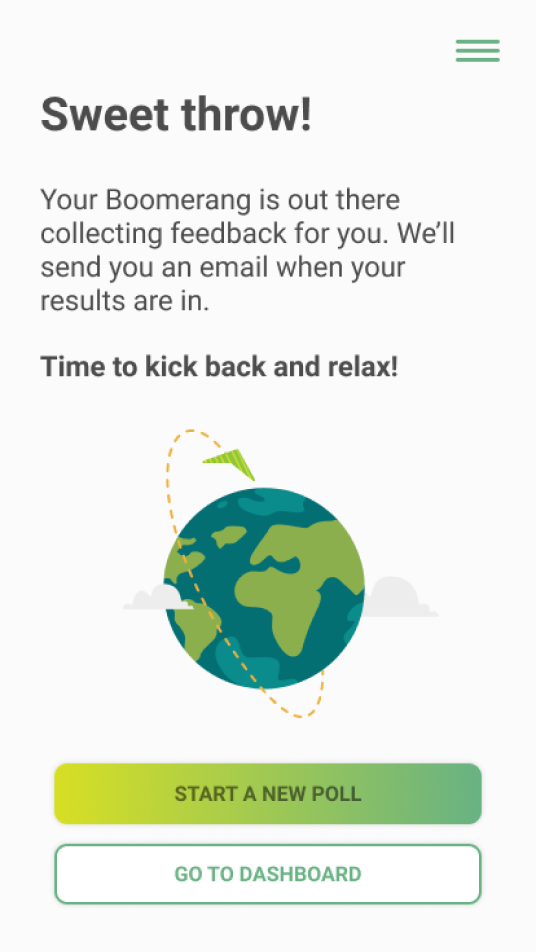 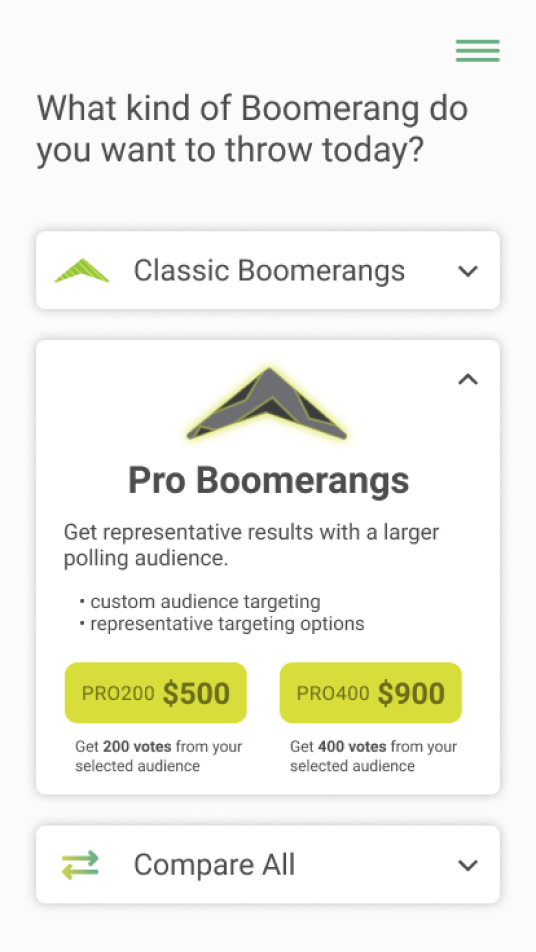 This was a bootstrapped project, so the budget was minimal and the pressure to publish quickly was high. The team consisted of the founder, a part-time developer and myself.

Due to the accelerated timeline, there wasn’t as much time as we could have used for the research phase. When I came on board, the idea of the base product had been developed, but the needs and attitudes of potential users hadn’t yet been examined. As this tool is the first of its kind on the market, it would have been valuable to start our research from a very broad spectrum and funnel down until we found the deepest user needs and adapted the tool to serve them.

In order to save time, we skipped a step and made the assumption that this tool could be used to validate ideas and markets for businesses. The product will be launching soon, so we will learn and iterate.

Something we foresee being a potential roadblock is that many people don’t know that it’s valuable to validate an idea before sinking time and money into it. Our current approach to this issue is to take the ‘teaching’ route. We’re developing a strong social media plan that features many light-hearted and informative posts.

We could also potentially get around this issue by changing our target market to users who know the importance of validation, such as designers, or by re-framing the tool as purely market validation.

Design Sprint Crowdsourced Voting Dots
Design Sprints are increasing in popularity, but you need to have a fair number of people participating. Users could select the types of people they’d like to collect feedback from and have them ‘vote’ on one of the proposed ideas.

Find Your Marketing Niche
Eliminate idea validation and focus on market validation. Most businesses are engaged in marketing efforts, and knowing which consumers are most interested in their offerings certainly improves ROI. Automating the process of narrowing down the population, focusing on receptive segments, will help businesses identify their target niche. Our users will be provided with ages, genders and locations of participants with whom the poll performed best, as well as the social media platforms and times of day with the highest engagement.

In user testing, we've already seen that users aren't responding well to the pricing packages. These will need to be optimized to the target market.
‍
Based on our initial research, users are uncertain as to how phrase their questions and select their target market. An important next step will be integrating strategically placed information to help guide users as they complete the steps in the web app.

Let’s have a chat!
😸
Thanks for the message! I’m looking forward to our chat.
Oops! Something went wrong while submitting the form.
Is your team searching for a UX Designer?
My ResumeLinkedIn
copyright 2019